The journey to Addis Ababa started with preparations in the Kenyan capital Nairobi. I ticked off all the requirements including flight tickets and Covid-19 negative test results. My health facility of choice was Aga Khan University Hospital based along the Third Avenue Parklands, just on the outskirts of Nairobi City.

On the day of the test, I arrived at the hospital main gate. It was my first time at the hospital facility which has been in operation for decades courtesy of His Highness the Aga Khan. This is the same man who founded the Aga Khan Academies and the National Media Group, the latter being founded in the 1960s.

Our taxi drove in into the reception area near an oozing water fountain.  We passed through security points and our temperatures were measured using a thermal gun. We sanitized our hands with a liquid made up of 70 percent alcohol content as directed by health bodies such the Ministry of Health (MOH) locally and the World Health Organization (WHO).

We found our way around the health facility and we were directed to the white tent located towards the far end of the hospital compound. Here we were welcomed by health workers in uniform who noted down our bio data and asked us to wait under the tent for our turn to make the payments and subsequently take the test. I paid and was ready to have a thin plastic stick with a soft cotton end trust into my nose to collect specimen for testing.

The test was quite irritating but if you must travel then a test is a pre-requisite. There are many facilities in Kenya which test for Covid-19 such as The Lancet, MP Shah and Nairobi Hospital among others.

I got tested at Aga Khan University Hospital. The person testing was in a glass booth with two holes in the rear. He used the two holes with gigantic gloves to access client seeking Covid testing services.

I sat down on the chair in front of the booth silently wondering how the test would be like. His assistant sanitized the gloves and handed him a test kit with my name written on it. He pulled out a plastic swap with a cotton end and inserted it into my nose. The assistant had earlier told me that I will experience some kind of irritation for half an hour or so. The irritation on my nose disappeared after just half a minute. I am glad that it never extended for the projected time. I was given a receipt for my payment and asked to come the following day at the same time to collect my test results. That I did and hence got a chance to travel.

On 12 October I flew from JKIA to Addis Ababa Bole International Airport in Ethiopia. That was one day before my conference happened.

While in Addis Ababa, I learnt that I won’t be allowed to travel home upon landing at JKIA because at that time my negative Covi-19 certificate would have expired. In that case I suspect that I would not even been allowed to board the Nairobi bound plane in Addis Ababa.

Having come into realization, that I needed another test, we visited International Clinical Laboratories (ICL) located along Burigaria road in Addis Ababa seeking to be tested.   However, we learnt that specimen collection is done at Amin General Hospital located near Coca Cola headquarters in Addis Ababa. We were well served there and I take this special opportunity to thank the staff especially the manager for making sure we got our test results in time for our flight back to Nairobi, Kenya.

I learnt that it is important to exchange your money and carry Ethiopian Birr or US dollars (USD) or Euros. Upon visiting a few forex bureau in Nairobi I found out that they did not have a stock of Ethiopian Birr (ETB).

Further, I learnt that you can only withdraw an equivalent of Ksh. 40,000 per day using your visa of Master Card at the ATM. Locals told me that even over the counter they are allowed to withdraw ETB 50,000 as the ceiling per day. That is an equivalent of Ksh. 150,000 if we use as exchange rate of 1 ETB = Ksh. 3.

The option you have to instantly send money to Ethiopia is use of Western Union which works quite well but those receiving the money have to withdraw up to ETB 50,000 per day. I think this is as a result of the ongoing demonetization process.

In my honest observation both Jomo Kenyatta International Airport (JKIA) and Addis Bole International Airport are colossal in size. Both countries are busy expanding both their airlines and airports. However, I find JKIA to be more secure considering that there is a security check a few kilometres before you reach the airport.

While in Addis I read the Constitution of Ethiopia just to satisfy my intellectual capacity. The constitution is the supreme law of the land. It provides for a decentralized form of governance with a federal government and 10 state governments.

Ethiopia has a bicameral parliament with the House of Federation (HoF) with 110 members and the House of Representatives with 527 members.  The country practices what is known as ethnic federalism (a subject for another day).

Each state has its own police force and courts. This is a point of departure when we compare Ethiopia to her East African neighbor – Kenya. In the latter, courts and police is a national government function.

Ethiopia is a country with plenty of diversity when it comes to languages spoken. There are over 80 local languages spoken in the country. A large number of citizens speak Amharic while a few speak English. This may be as a result of public policy when English is not compulsory as it is in Kenya. In Kenya, English and Swahili are the main languages of instruction in the education system. In fact English dominates Swahili by a large percentage. This might have been due to the colonial past where the country was colonized British who introduced their language to Kenya and many other colonies.

We can conclude that the language of instruction in most African countries depends on who colonized those countries. In fact countries such as Senegal French is spoken because it was colonized by France.

Ethiopia and Tanzania have embraced their own lingua franca that is Amharic and Swahili respectively. Ethiopia’s case is because the country was never colonized and hence they settled on Amharic. It is one of those lucky countries which remained free from the burden of colonization. Ethiopians fought hard against the Italians who were making an attempt to establish a colony in the county. The other  county which was never colonized is Liberia which was set aside for receiving back home people of African-American descent whose ancestors had been taken away to work on American sugar plantations as slaves. 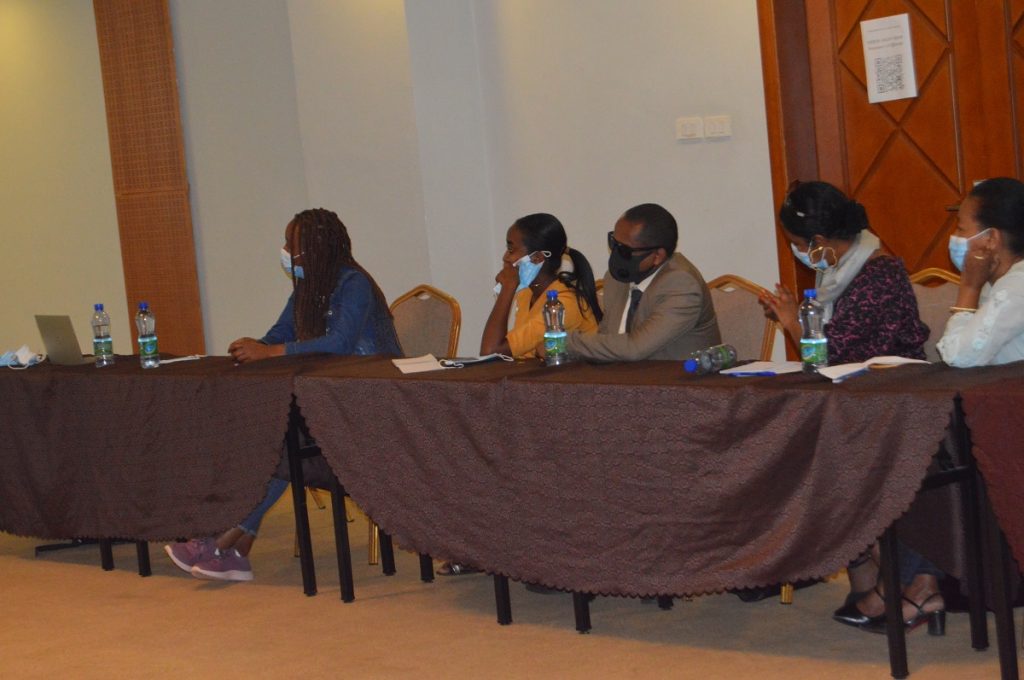 Attended a meeting in Addis Ababa as shown by the photo above and below: