The Nobel Prize Committee has announced the name of three winners of 2021 Nobel Prize in Physics. These are: 1) Syukuro Manabe (USA), Klaus Hasselmann (Germany) and Giorgio Parisi (Italy). 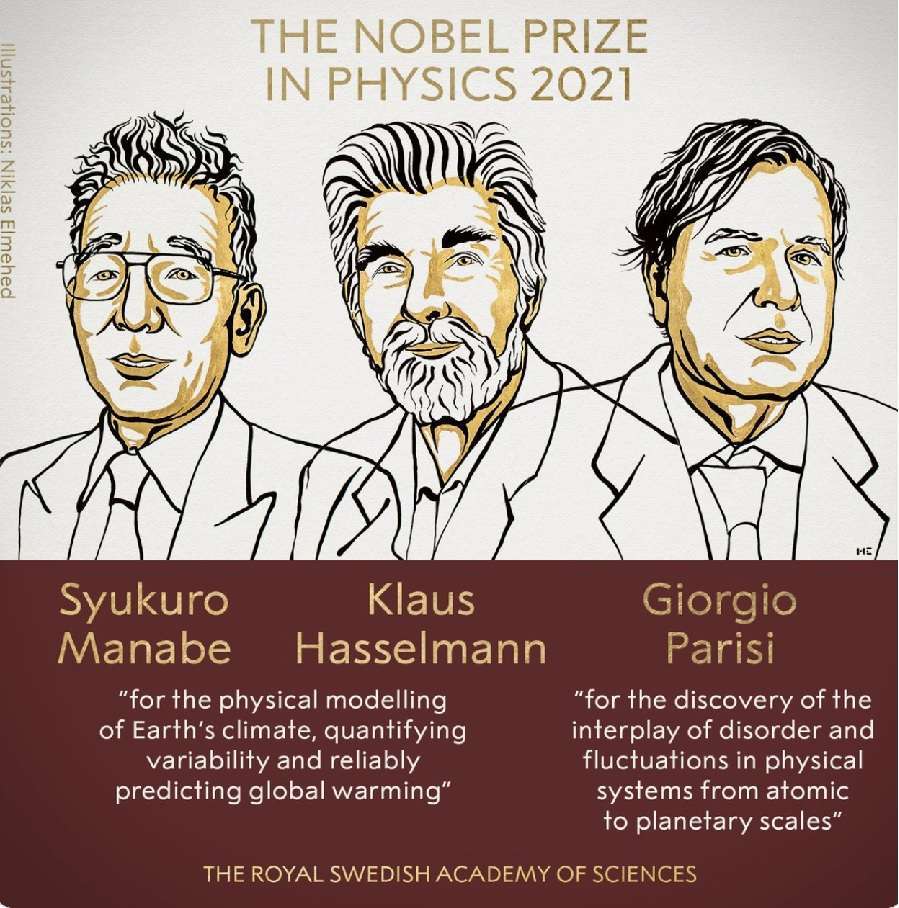 The announcement was made from the Royal Swedish Academy of Sciences by three members of the Nobel Prize Committee.

Syukuro Manabe and Klaus Hasselmann have been jointly awarded one half of the 2021 #NobelPrize in Physics “for the physical modelling of Earth’s climate, quantifying variability and reliably predicting global warming.”

Giorgio Parisi has been awarded one half of the 2021 #NobelPrize in Physics “for the discovery of the interplay of disorder and fluctuations in physical systems from atomic to planetary scales.”

Syukuro Manabe was born in Japan on 21 September 1931. He is a meteorologist and climatologist who has used computers to model the global climate change as well as natural climate variations. In 1958, Manabe received his PhD from University of Tokyo and moved to work at the U.S. Weather Bureau. He currently works at Princeton University as a senior Meteorologist.

Klaus Hasselmann was born on 31 October 1931 in Hamburg, Germany. He is a leading climate modeller and oceanographer. He earned his PhD in Physics in 1957 from University of Göttingen and Max Planck Institute of Fluid Dynamics. Klaus is the current chairman of European Climate Forum.

Giorgio Parisi was born on August 1948. He is a theoretical physicist.  His research has focused on complex systems, quantum field theory and statistical mechanics. Parisi is currently a full professor at Sapienza University in Rome, Italy. He has won prizes such as Microsoft Award (2007), Lagrange Prize (2009), Max Plank Medal (2011), Enrico Fermi Prize (2002), Boltzmann Medal (1992) and Feltirinell Prize (1986) among others.

Journalists from various media houses such as the Associated Press, TV4 and Lundagard asked questions to Giorgio Parisi who joined the announcement online.

The panel clarified that the Nobel Prize on Physics is a divided prize. There is one which is to do with disorder and fluctuations. There is need to know how to decode the chaotic weather.

Lundagard asked the panel whether this prize in Physics was to send a strong message to world leaders on global warming.