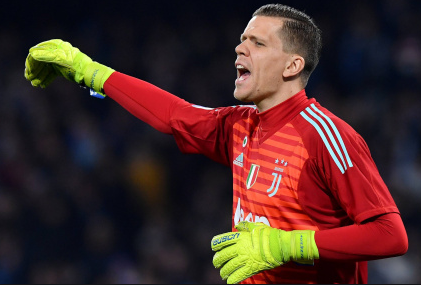 Wojciech Szczesny has signed a new deal at Juventus

Juventus goalkeeper Wojciech Szczesny has penned a new deal with the Serie A giants until 2024.

The Poland International has established himself as the Juventus first choice goalkeeper since Gianluigi Buffon left for Paris Saint Germain ahead of 2018/2019 season.

Szczesny joined Juve from Arsenal in 2017 and spent two seasons on loan at AS Roma.

The 29-year old has made 84 appearances for the Serie A defending champions, winning the Serie A twice, one Coppa Italia and one Supercoppa Italiana.

Szczesny has kept Buffon on the bench since his return from Paris Saint Germain.

‘’This is a demonstration on behalf of the club of the trust they have in me, and so I am very very happy. I will look to keep giving my best for the next few years with Juve. I am here until 2024 and I want to win everything. This is the objective of the club and the players. We need to sweat, to run and sacrifice to achieve the objectives, which is more trophies and titles.’’ Said Szczesny.

Juventus are position 2 in the Italian Serie A table after 23 matches.