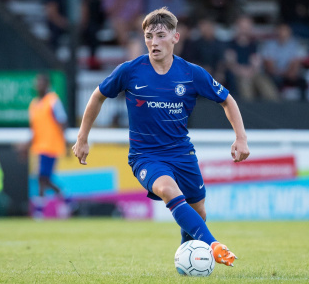 The blues have promoted highly rated midfielder Billy Gilmour to their first team on a permanent basis.

The Scotland youth international is highly talented and the Chelsea’s coaching staff have decided his talents suit the first-team.

Chelsea boss Frank Lampard has been praised for his use of youngsters.

Lampard made Gilmour aware of the club’s coaching decision during Chelsea’s trip to Leicester at the start of February.

‘’It’s a massive moment for me and I’m really happy,’’ Said Gilmour.

‘’I went with the squad to Leicester and, even though I wasn’t involved, the gaffer[Lampard] pulled me afterwards to tell me that after the winter break I’d be with the first team permanently. It’s a dream come true for me. It’s the first big step I think, moving into the first team dressing room at a club like Chelsea. It’s massive for me.

‘’Knowing that the manager has such faith in you is massive, it gives me so much confidence when I step into the field. It’s really good knowing that he trusts in you and he likes the way you play, and I think that’s the same for everyone here.

‘’Age isn’t really an issue here. The gaffer has shown that if you work hard and perform well, you will get opportunities. Hopefully, I can keep pushing on and work hard every day in training.’’