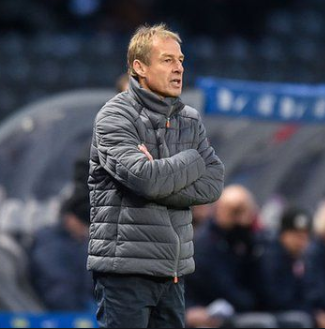 Jurgen Klinsmann has resigned as Hertha Berlin head coach after 11 weeks since his appointment, citing lack of trust from the club’s hierarchy.

The former Germany boss resigned on Tuesday. He was appointed in November on a contract running until the end of the season after Ante Covic’s departure.

The 55-year old took to social media, saying he would revert to his position as a member of the supervisory board at the German club.

‘’At the end of November we met the wishes of the club management with a highly competent team and helped them in a difficult time,’’ wrote Klinsmann.

‘’We are on a very good path in the relatively short time. And thanks to the support of many people, we are now six points away from relegation places despite mostly difficult games.

‘’I am firmly convinced that Hertha Berlin will achieve the goal remaining in the division.

‘’As the head coach, however, I also need the trust of the people involved for this task, which has not yet been completed.

‘’Unity, cohesion and focus on the essential are the most important elements, especially in the relegation battle. If they are not guaranteed, I cannot exploit my potential as a coach and therefore cannot live up to my responsibility.

‘’Therefore, after much deliberation, I came to the conclusion that I would give up my position as the head coach at Hertha and retire to my original long term-role as a member of the supervisory board.’’