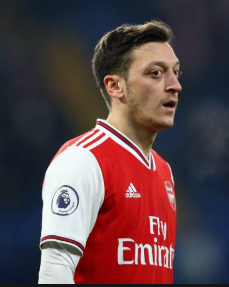 Mesuit Ozil admits he is unsure about his long-term future despite having a more positive spell with the Gunners.

With a year left in his current deal, Ozil has been linked with a move to American side DC United as well as Turkish club Fenerbahce.

The attacking midfielder looks uncertain on what the future holds but he is determined to give his all for the Gunners for the rest of the season.

‘’After this season I have one more year and then after that I don’t know what will happen because I can’t see the future. What I can do is to give everything for the team, for myself, to be successful and let’s see what happens in the future.’’ Ozil told reporters during Arsenal’s training camp in Dubai.

Despite Arsenal winning only one game since Arteta’s appointment, Ozil insists that there are signs of improvement under the former Manchester City assistant manager. He also believes Arsenal can still qualify for the Champions League next season.

‘’We know it’s a hard season for us, but we want to win games to take the points and to be maybe at the end of the season in the top four. Our goal is to be in the Champions League. This year, we had difficult times, but I think we are in a good way.’’

Arsenal face Newcastle at home in their next Premier League match scheduled on February 16.