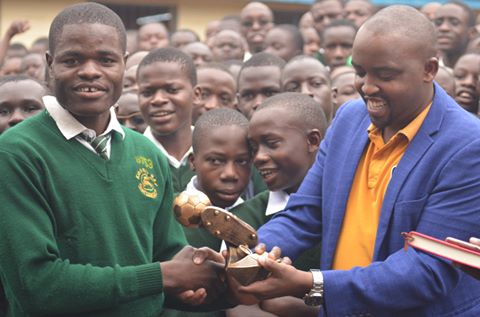 Seventeen year old Western Stima striker Benson Omala was crowned Sports Journalists of Kenya KPL player of the month of December, becoming the youngest player to ever win the award. He is a student at Kisumu Day High School.

Omala also became the first Western Stima player to ever score a Hat-trick in a League match.

‘’I must thank my coach for believing and nurturing me and I’m glad I repaid their faith by showing my brilliance and scoring goals which is a strikers primary target,’’ the form four candidate told reporters after bagging the award.

‘’I’d like to score more goals if I get game time and be among the top scorers. My ambitions are to play for the national team. I already scored two goals for under-20 national team in Cecafa and I’m glad I was called up to the senior team despite not making the final cut.’’ He added.

His coach Andrew Aroka lauded Western Stima for trusting and believing in Omala and giving him the chance to play in KPL.

‘’I have handled a lot of players but very few compare to this boy. They have been good in their own right but Omala is just a complete striker with very huge potential,’’ Said Aroka.

Omala was part of the Chapa Dimba na Safaricom All-Star team that went to Spain after he emerged the top scorer in the in the regional duels.