The first professor of Economics in Kenya that we are going to cover is Prof Germano Mwabu. He earned his PhD in 1984 from Boston University. He served as a Rockefeller Postdoctoral Fellow from 1993 to 1996. Since 1990s he has worked in various capacities at the African Economic Research Consortium (AERC).

The next person in our list of professors of economics in Kenya is Prof. Peter Kimuyu. He earned his PhD in economics in 1988 from University of Nairobi. Previously, he had earned two master’s degrees University of Surrey and UON. In 1975, he earned a Bachelor of Education degree in Economics and Education.

Prof. Kimuyu is a member of prestigious bodies such as New York Academy of Sciences, Chairman Board of Trustees for Reaching out of Africa’s Poor.

Our first woman in the list of professors of economics in Kenya is Prof. Jane Kabubo-Mariara. She is currently working as an Executive Director (ED) at the Partnership for Economic Policy. She is also a professor at University of Nairobi (UON).

Prof. Jane Mariara previously served as a Director of School of Economics at University of Nairobi. She is a resource person at the African Economic Research Consortium (AERC). Finally, Prof Jane Mariara has over 25 years of university teaching and research experience.

Prof. Martin Etyang has published articles in refereed journals with other authors such as Onono, Kinuthia, Manyasa, Bosire and Susan Onwonga among others.

Professor Martin Etyang has served in various administrative positions such as: Registrar Administration at Kenyatta University for 6 years up to 2005.

Professor Nelson Wawire a member of this prestigious list of professors of economics in Kenya has served under various capacities in various institutions such as Dean at Kenyatta University’s School of Economics, Acting Deputy Vice Chancellor Academic, Acting Dean, Committee Member at the Teaching and Referral Hospital at Kenyatta University, Programme Coordinator, Chairman Masters in Business Administration (MBA) Review Committee and Exams Coordinator at the Department of Economics among other positions.

Professor Wawire has successfully supervised 24 doctorate students and 11 more are ongoing. He has supervised 44 Master’s students and all of them have completed their studies.

Tabitha is a full professor of Economics since February 2016. The professor has specialized in International economics and development economics among others.

Prof. Terry Ryan is an economics professor who has held many positions in Kenya’s public sector. He has worked as an advisor on economic policy in government as well as in the private sector in Kenya. He previously worked as a Commissioner at the Commission on University Education. Further, he has held senior positions at the Central Bank of Kenya and has been a member of the Monetary Policy Committee. He served as Director of Planning at the Ministry of Planning and National Development in Kenya. In the past, he worked as Economic Secretary at the Ministry of Finance in Kenya.

In terms of teaching, Professor Terry Ryan taught at the University of Nairobi as an Associate Professor.

He has consulted widely with the World Bank Group, UN Agencies and the Government of Kenya. Professor Terry Ryan is widely published locally and internationally.

Ryan was the head of  Postgraduate department from 1966 to 1983 at the University of Nairobi where he taught a common unit called “pure economics” which was compulsory for any student who wanted to graduate with a degree. 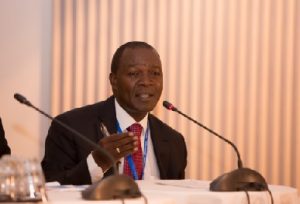 Professor Njuguna Ndung’u was a former Governor of Central Bank of Kenya where he served for two terms of 4 years each. From 2003 to 2007 he served as the Director of Training at African Economic Research Consortium (AERC).

Professor Njuguna earned his PhD in Economics from Gothenburg University in Sweden and has worked as a Principal Researcher for Kenya Institute of Public Policy Research and Analysis (KIPPRA) and International Development Research Center (IDRC).

Prof. Njuguna Ndung’u had worked as a staff member at the Department of Economics since 1987. He rose the ranks to a position of Associate Professor. Njuguna has published widely on economic policy.

For 22 years Prof. Seth has researched and taught at the University level. He has been supervising Masters and PhD students for more than 20 years.

Prof. Seth has consulted for East Africa Community (EAC), Trade Policy Training Center in Africa, Ministry of Labor, United Nations Population Fund and UN Africa Institute for the Prevention of Crime and the Treatment of Offenders.

Bitange Ndemo is a full professor at the Department of Business Administration School of Business- Nairobi University. He was a former Permanent Secretary at the Ministry of Information and Communication and Board Member at Safaricom PLC and Senior Advisor to Research ICT Africa. In 2000, Bitange Ndemo earned a PhD in Industrial Economics from University of Sheffield in England and in 1991 he had earned a Master in Management Information Systems from University of St. Thomas in Minnesota, USA.

From 2013 to date he has been working in a special assignment as a Senior Advisor as the UN Global Pulse or Big Data Initiative.

He was promoted to an Associate Professor in Entrepreneurship in 2013 by the University of Nairobi.

Finally, Prof Bitange Ndemo has been a columnist writing a weekly column on the Daily Nation and Business Daily, The Financial Standard and the Jua Kali Weekly newspapers.

Prof. Willy Muturi is a socio-economic expert with over 27 years of experience teaching, supervising and consulting and one of the professors of economics in Kenya. He holds a Bachelor’s, Masters and doctorate degrees in Economics.

Willy Muturi is currently serving as an Associate Professor at Jomo Kenyatta University of Agriculture and Technology (JKUAT).

He has in the past held several other positions withing the University. Before joining JKUAT in 1990, he worked for Kenya forestry research as a scientist.

Prof. Samuel Mazera Mwakubo is one of the professors of economics in Kenya. He earned his PhD in Environmental Economics from Moi University in 2003.

He is currently working as an Associate Professor of of Agricultural and Resource Economics at Pwani University.

Professor Samuel has grown from a high school teacher at Ramisi Secondary School in Kwale to his current position as a Dean School of Business and Economics at Pwani University.

Prof. Wafula Masai is one of the professors of economics in Kenya. Masai is currently working at the University of Nairobi and also as a Commissioner at the Commission on Revenue Allocation.

Professor Masai Wafula has participated in a number of short study tours such as those organized by Finance Commission of India, study tour of South Africa, staff exchange at the University of Antwerp in Belgium (1998), writers workshop at Cornell University (1998), AERC, IPAR and UNEP among others.

In our list of professors of economics in Kenya, we highlight the profile of George Kinoti King’oriah who is currently lecturing and researching at the Technical University of Kenya.

He studied Land Economics at University of Nairobi (1971), then moved to Indiana State University where he earned a Master’s degree in Economics with a focus on Urban regional analysis (1978) and in 1980 he earned a PhD in Economic Geography from the same University. He was promoted to being a professor in May 2019.

Professor George Kinoti has held a number of administrative positions such as Dean at University of Nairobi’s Faculty of Architecture (1986-1990), Principal College of Architecture and Engineering (1992-1994). Professor George Kinoti has been Chairman of department of Land Development at UON and Real Estate Appraiser at the Ministry of Lands and Settlement (1973-1974).

Professor George Kinoti started teaching at the University of Nairobi in 1975 where he taught courses such as land economics, town and country planning, urban economics and management, econometrics and calculus.

Between 1994 to 1997 he served as a Deputy Vice Chancellor Finance and Administration at Egerton University.

Prof. Robert Mudida is one of the professors of economics in Kenya. He is an Associate Professor at Strathmore University Business School.

Professor Robert Mudida has a lot of experience having worked for numerous international organizations. He has worked with both the Embassy of Chile and that of Spain in Kenya.

He has consulted widely with the World Bank as well as Financial Sector Deepening Trust among others.

Prof. Alloys Ayako is the Director of Research, Innovation and Graduate Training at Catholic University since August 2007. For 6 years, he served as a Chief Economist at Central Bank of Kenya (1999 – 2006).

Prof. Alloys Ayako earned a PhD in Economics from Boston University (1979- 1984). He also earned a Masters in Arts in Political Economy from the same university.

Before Prof. Joseph Ongeri moved to the USA, he worked as an economist at the Ministry of Planning in Kenya.

Prof. Dickson Nyariki is one of the professors of Economics in Kenya. He holds a PhD in Agricultural Economics from University of Reading in United Kingdom (1997). He is currently the Vice Chancellor at Murang’a University of Technology.

Professor Dickson Nyariki also studied economic crops for arid lands at Ben-Gurion University of the Negev  in Israel in 1990.

Professor Dickson Nyariki has taught and conducted research for more than 20 years. His research focuses on natural research productivity, natural resource policy and livestock marketing among other areas.

Professor Dickson Nyariki is a member of professional bodies such as British Agricultural Society, East African Wildlife Society (EAWS) among others.

Professor Michael Chege has served as a consultant for the World Bank Group among other organizations.

Professor Bernard Njehia is the current Dean School of Agriculture and Enterprise Development at Kenyatta University. He graduated with a PhD in Agricultural Economics from University of Hohenheim, Germany in 1994.

(to be regularly updated)

Call to Action: If you know any professors of Economics in Kenya who have not been covered here, let us know in the comments section below. We will add their profile ASAP.