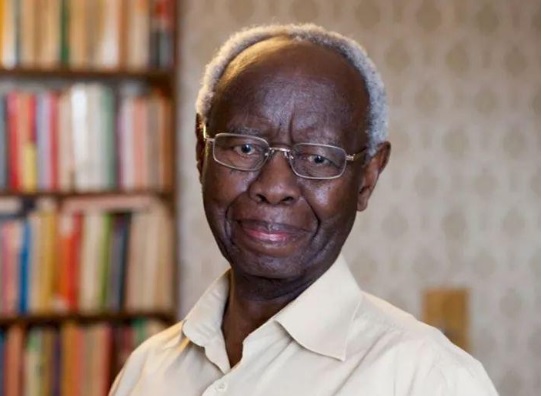 Dr. John Samuel Mbiti died in Switzerland where he was working as a theologian and Philosophy professor at the University of Bern.

“We’ve lost a great Kenyan. A great man who went against all odds to become a successful scholar, writer and priest. He was a role model and an ambassador of the Kenyan brand abroad,” wrote President Uhuru Kenyatta.

In 1963, Mbiti earned his doctorate degree in Philosophy  from University of Cambridge.

Between 1964 to 1974, Mbiti taught theology and religion at Makerere University in Uganda.

Later he served as the Director of the World Council of Churches Institute in Switzerland.

Dr. Mbiti is widely published in the fields of Philosophy, African Oral Traditions and theology.

Thanks be to God for the life, scholarship and witness of a key father of African theology, Canon Prof John S Mbiti, who has died peacefully in Switzerland. It was a joy to see him at @lambethpalace in February 2017. pic.twitter.com/yld6JLJluL

Many Kenyans have also sent their condolences to the departed scholar:

Prof John Mbiti, Kenya’s — one of the world’s most iconic philosophy and religion scholars — passed away today in Switzerland. Ironically, I wrote about him in my Sunday Nation column today before he passed. May his family and friends know peace @WMutunga @ncckkenya @RailaOdinga pic.twitter.com/Fr2lGfWqeD

2: Some of books by Professor John Samuel Mbiti. He was my brother, mentor, friend, and my role model since I was in primary school in 1950s when his novel in Kiikamba, Mutunga Na Ngewa Yake, was one of our set books. From Allah We Come; To Allah We Surely Return. pic.twitter.com/lGKpZZRRWN

The state of housing in Kenya 2018 by Professor Alfred Omenya