Images of a rare zebra were emerged online after it was spotted at Maasai Mara Game Reserve. This photo has now gone viral. It’s uniqueness is about its stripes which are very different from the ordinary ones which has black and white strips.

The photos was shared by a tour guide known as Antony Tira. The young but unique zebra has been christened as Tira. At first he thought that the young zebra has been painted for migration purposes.

At first I thought it was a zebra that had been captured and painted or marked for purposes of migration. I was confused when I first saw it,

The zebra which was 1 week old when the photos were taken. However, zoologists have helped in unraveling the mystery by stating that the young zebra has melanin disorder. They further revealed that Zebras do not have to be black and white. Their black and white strips were due to adaptation to the environment.

The default color of zebras is black, the white color is as a result of inhibition of melanin. The color code is believed to help the Zebras to prevent insects from landing on their bodies. The monochrome pattern is reported to be capable of throwing off balance the way flies visual systems work.

The zebra mum had sex with an antelope. That makes the zebralope a half cast with dual citizenship.

Enjoy watching the photos below: 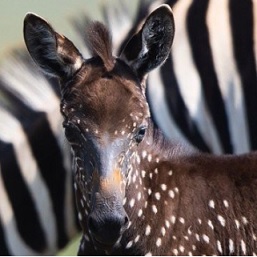 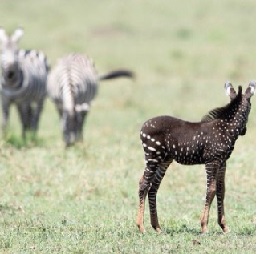