The remains of Robert Mugabe, former President of Zimbabwe, landed in Harare on September 11. That notwithstanding, his final resting place has not been determined. This is a disputed issue between the state and some of Mugabe’s family members.

Mugabe ruled Zimbabwe for 37 years and was overthrown by the military in Nov 2017.

Many people gathered at the airport to receive his remains which arrived in Harare as scheduled.

A large convoy of 4×4 motor vehicles with their number plates written “RG Mugabe” as well as his signature were waiting on the runway.

The remains of Robert Mugabe were escorted by Grace Mugabe and Vice President Kembo Mohadi among others from Singapore where he died five days ago.  President Mnangagwa and Mugabe’s family members were among the crowd which received the body of the former President.

Mugabe was a divisive figure in life and now in death. Just to illustrate this point, media houses form Zimbabwe reported that his body was taken to One Commando military barracks instead of his palatial Blue Roof residence in Harare which was preferred by family members. Blue Roof palace is located in the leafy Borrowdale suburb.

And let it not be forgotten that One Commando is one of the three regiments that executed the military coup on November 15, 2017, in brutal violation of the Constitution of Zimbabwe. It will be in bad taste to take President Mugabe’s body there. Blue Roof is the best place!

Check out the photos below: 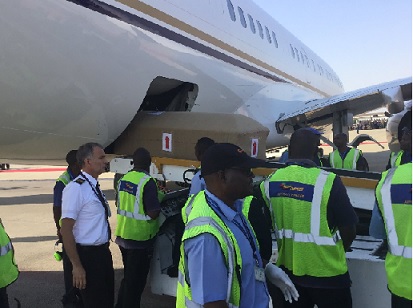 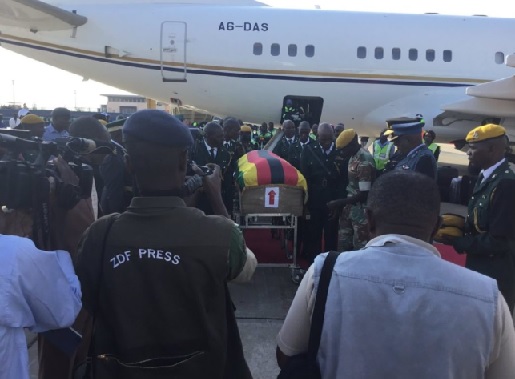