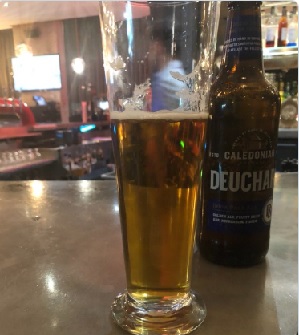 Meet the most expensive beer in history!

Peter Lalor, Australian journalist, is a beer aficionado. Here is how he describes himself on his Twitter account:

Cricket writer and beer editor of The Australian, author of some books, ghost of others, all views borrowed or my own …

See this beer? That is the most expensive beer in history.
I paid $99,983.64 for it in the Malmaison Hotel, Manchester the other night.
Seriously.

Peter Lalor loves nice beer as well as wine. Recently he visited a an hotel bar in Manchester, England with an objective of spending $6.76 on beer. To his shock he was charged x 10,000 times that price for a bottle of beer. He shared the photo of the most expensive beer in the world.

This unfortunate event happened on Sunday night while on his way back from dropping a friend at a train station. He stopped at Malmaison Hotel on his way back and ordered for a beer.

He was offered Heineken by the bartender. Instead he decided to drink an IPA which in his opinion was Scottish.

At the time when the bartender gave him his bill, he was not wearing his glasses and as a result. He asked her what they had charged him for the beer, she started laughing instead of answering the question.

The Hotel Management assured Peter Lalor that he will get his refund. On consulting his bank, he was informed that it takes up to 10 working days to get a refund.

Malmaison Hotel later told CNN that it had apologized for the error committed.

We hope we can invite Peter back for another drink soon. The next one is definitely on the house!