Ex-Ghana International Manuel Junior Agogo has died at 40. The forward managed 27 appearances for Ghana where he scored 12 goals.

Junior Agogo died in London early today. Junior Agogo had been hospitalized in 2014 and 2015 after suffering a stroke. He revealed that he was still suffering from the stroke earlier this year.

The veteran striker has played for a host of clubs. He started his football career in 1995 with Sheffield Wednesday and made two appearances for the then premier league club. He was loaned out in the 1999/2000 season to Oldham, Chester City, Chesterfield and Lincoln City. 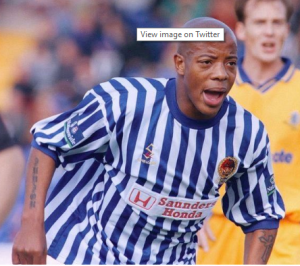 In 2000 Junior Agogo moved to the United States where he played for three Major League Soccer clubs. The clubs are Chicago Fire, Colorado Rapids and San Jose Earthquakes.

Junior Agogo made his return to England in 2002 and played two games for Queens Park Rangers before moving to Barnet FC.

Between 2003 and 2006, Junior Agogo played for Bristol Rovers where he made 126 appearances for the club.

In 2008, Junior Agogo joined Egyptian side Zamalek SC and after a year, he left to join Cyprus club Apollon Limassol. In July 2011, he signed a one year contract with Scottish club Hibernian where he made 14 appearances. In January 2012, the club released him from his contract.

Below is a summary of the clubs that Junior Agogo played for:

May his soul Rest In Eternal Peace.

One thought on “Former Ghana International Junior Agogo dies at 40”