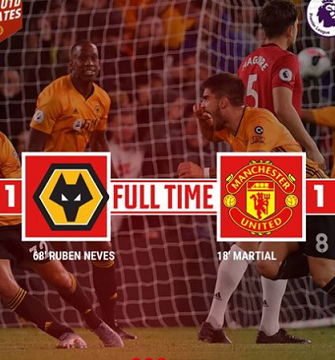 Wolverhampton FC drew 1-1 with Manchester United in a match that was played at Molineux Stadium last night.

Manchester united took the lead at the 18th minute through Antony Martial’s goal. United went into halftime 1-0 up. It took Wolverhampton FC ten minutes into the second half to equalize through Ruben Neves.

Manchester United’s Jesse Lingard missed a good scoring chance. Manchester united had another chance to take the lead in the 67th minute when Conor Coady brought down Paul Pogba in the box. Paul Pogba played the penalty only to see it saved by Wolves goalkeeper Rui Patricio.

This led to some fans abusing the Frenchman racially. Manchester United said that they are ‘disgusted’ by the abuse and utterly condemn it.

‘’The individuals who expressed these views do not represent the values of our great club and it is encouraging to see the vast majority of our fans condemn this on social media also. ‘’ Read a United Statement. Paul Pogba becomes the third player to be racially abused after Yakou Meite of Reading and Chelsea’s Tammy Abraham. The two players also had their penalties saved.

The Red devils dominated the game but were unable to secure a win. The draw means Manchester united are now in 4th position and Wolverhampton are 13th in the Premier League table. All the teams have played 2 matches.