If you have been following the division of revenue bill 2019, you may be aware that there was a stand off between the Senate and National Assembly.

Ultimately, the mediation committee failed to reach a consensus or an agreement.

The Deputy President, Dr. William Ruto, presided over the mediation committee and asked members not to stick to their guns on the issue of Division of Revenue Bill 2019.

The national budget was approved without agreeing on how much the 47 counties will receive.

On  15th of July 2019 Governors, their deputies met at Laico Regency Hotel from 9:00 am to discuss their predicament before marching to Supreme Court where they presented their petition.

The protest march was led by the Council of Governors Chairman Wycliffe Oparanya and his vice Chairman Mwangi Wa Iria.

“The country’s economy has been projected to grow by 6.2 percent from the current 6.1 percent. There is a positive outlook in terms of economic growth and growth in ordinary revenues and there is absolutely no scientific reason for the equitable share of revenues to the counties to be reduced,” said Wycliffe Oparanya the current Chairman of Council of Governors.

“Very few counties have enacted their budgets. Quite a number have not because they don’t know the figure to use,” added Governor Wycliffe Oparanya.

Kenyans had the following to say on social media platforms: 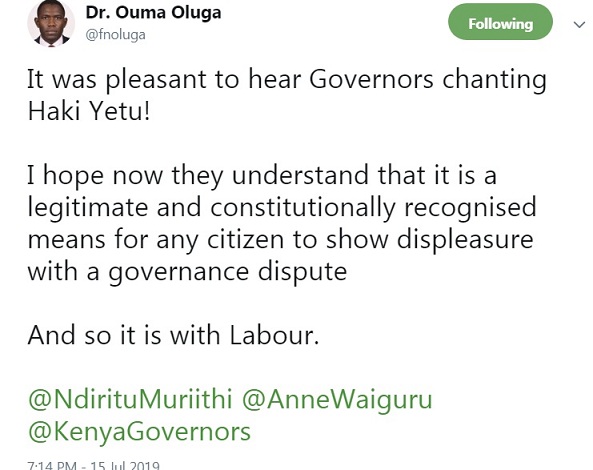