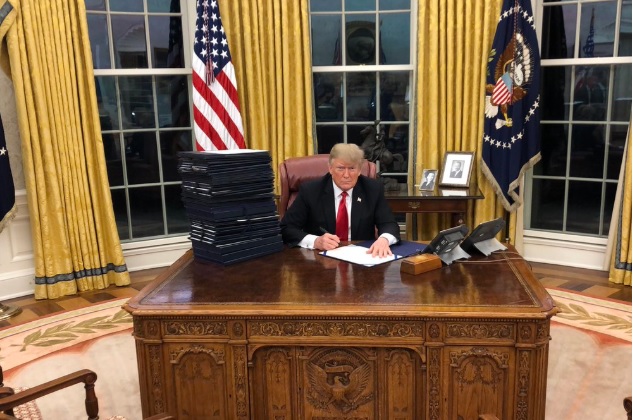 US Government Shutdown begins after disagreements over the wall deal

US Government Shutdown begins after disagreements over the wall deal

Donald Trump has been demanding for money to built a wall along the US-Mexico border. He swore that he would shut down government if that money is not allocated as demanded.

Early Saturday, the Congress adjourned before allocating the resources. Hence, the government critical services were shutdown from 12:01 on Saturday (today). This happened despite the ongoing talks at Capital Hill between the White House officials and the representatives of both parties (Democrats and Republicans) at the US Congress.

During the US government shutdown, non-essential employees including the border security agents shall not be paid until the dispute ends.

President Donald Trump is blaming the Democrats for the shutdown. The latter have also responded by reminding the President that he had said that he will be “proud” to shut down key government services in order to force Congress to allocate funds for the construction of the wall along US-Mexico border.

President Donald Trump was demanding that $5 billion be allocated towards the construction of the said wall.

Chuck Schumer, the Senate Democratic leader vowed that Trump will not get any money he is demanding any time soon. According to the Senator, the situation will worsen in 2019 and beyond when the Democrats will take full control if the Senate.

Donald Trump made the US-Mexico border wall one of his campaign  promises in the 2016 elections. At that time he said that the construction costs will be covered by Mexico.

Donald Trump sees this promise as a key pillar towards winning during the 2020 re-election campaign.

All National parks will remain closed during the shutdown unless the United States government declares them essential.