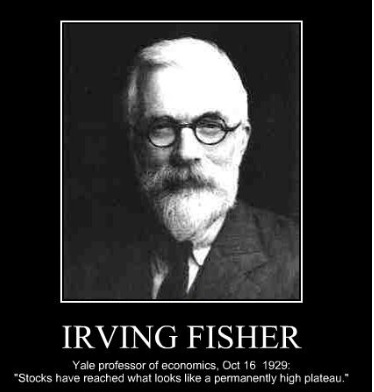 Irving Fisher was one of the greatest American economists who made USD$10 million from stock trading and later lost it all during the 1929 Great Depression.

Despite these great misfortunes, Fisher is regarded as one of the best economic thinkers that America has ever produced.

In 1930s, Irving Fisher co-founded and became the first president of the Econometric Society.

Irving Fisher always believed that the economic world of always “misty region.” During most of his working life, Fisher avoided supervision of graduate students and was mostly a lone ranger in his work.

Earlier in his career, he had planned to write one book every year but he failed to attain that target. As a compromise, he produced one book every two years during his working life.

In public life, his presence was felt. He was well known. He also worked a businessman as well as served as a director of many companies some of which he co-founded. This is how he accumulated his great fortune from business and stock trading.

Fisher was gifted in Mathematics and as a result, he was admitted at Yale University in 1884. While studying as an undergraduate, he taught mathematics and participated in various competitions where he won numerous prize money awards in algebra, Greek and Latin.

In 1888, Fisher graduated and continued with his post-graduate studies at Yale University.

While at the University, he is reported to have studied all the natural and social science courses offered at Yale.

He always expressed his desire to make money and read as much as possible.

In 1891, he began his journey to study for a doctorate degree in Mathematical economics. He crowned his studies with a doctoral thesis, titled “Mathematical Investigations in the Theory of Value and Prices.” This thesis was praised by Nobel Laurate Paul Samuelson as “the greatest dissertation in economics every written.” When this comes from a professor and author of one of the most read economics textbook, it is true. Fisher must have done his homework very well.

In 1898, Fisher was promoted by Yale to become a full professor and as a result his salary was $3,000 per year. This was a lot of money at that time. The income was more than what a middle class family could make in a year.

Fisher had married from a wealthy family and his wife’s inheritance helped them live a comfortable life.

Fisher was always obsessed with health and diet. He would not smoke, drink alcohol, coffee, tea and rarely ate meat.

Every morning, Irving Fisher would arise at 7:00 am every single day and go out for a run around his neighborhood. This would be followed by a breakfast.

At noon Fisher exercised again, this time at the gym at home. In the late afternoon, he walked or jogged at the public park.

While travelling, Irving Fisher maintained his training schedule and observed a strict diet.

Later on, he became a health guru and as a result he was known all over America. On this, he encouraged all people to practice health lifestyles which includes frequent health-checks.

He clowned his health work by authoring a book in 1915. He advised people how to live and as a result people bought 400,000 copies. The book was translated into a total of 10 languages. The proceeds from this book (valued at $75,000) was donated to Life Extension Institute (LEI).

Fisher viewed alcohol as a poisonous substance which undermines productivity. To Fisher, consumption of alcohol is very harmful. He therefore, advised his fellow citizens to abstain from alcohol.

During his lifetime, he actively engaged in activism and various campaigns. He had a lifelong association with Yale University where he worked as a professor and earned a good salary which afforded him a comfortable life.

In addition to his salary as a professor at the department of economics, Fisher supplemented it with some income from his various activities.

Fisher invested a lot of his money on the stock market. As indicated earlier he generated a $10 million fortune. He always borrowed resources to invest and leverage on the good economic times.

In 1923, Fisher started investing in economic data. As a result, he established The Index Number Institute (INI) which published weekly and monthly data on prices and economic activity.

Many people who knew Fisher were impressed by the great or impressive optimism which he always expressed in his activities.

Finally, I thought it is important for me to note that Irving Fisher is the man behind the great formula: MV=PQ. Where M = Money Supply, V= Velocity of money; P=Prices; Q=Quantity. This links quantity of money to inflation or general increase in prices.

More from EconomicsMore posts in Economics »