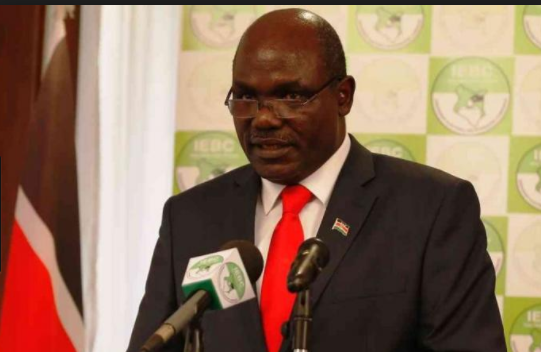 Independent Electoral and Boundaries Commission IEBC chair Chebukati has had a tough time leading what he claims to be a divided commission. With him losing a number of court cases and one of his commissioners and closest ally, Dr Akombe Rosyline ran to New York and resigned afterwards. This was after a series of unfortunate events such the murder of IEBC ICT manager Chris Musando; losing court cases; National Super Alliance (NASA) coalitions protests against some IEBC officials among other reasons.  Wafula Chebukati looked like a man ready to resign a few days to the repeat presidential poll on 26th October 2017.

The difficulty times Chebukati has gone through while serving as chair to the IEBC led him to envision a number of questions which he thought if answered correctly will help Kenya move forward. During his declaration of the winner in the repeat poll at the Bomas of Kenya, Chebukati took some time to lecture Kenyans.

“What I wish for and my vision is for this to be the last election in Kenya where we have to face the same problems” said IEBC chair Chebukati.

At Kerosi Dotcom, we took our time in thinking through the rhetoric questions raised by Chebukati. Below are our answers.

An election is a contest like any other competition where at the end we have a winner and a looser(s). Looking at other competitions like the World Olympic Championships, literally there is no loser because the difference between the winner and the loser is not much. The winner takes home a gold medal, whereas the second and third takes home silver and bronze medals respectively. Imagine of an athletic competition where it is only the one who comes first is awarded, how will the contest be? I think it will be like Kenya’s presidential elections. In Kenya, the winner takes it ALL.

The presidency in Kenya is the top-most office that comes with power, plum positions, security, and highest pay (in government). The decisions made by the office are not easily questionable. Currently, the office seems to control all the other arms of government (they are supposed to be independent). Eyeing such an office you’ll be tempted naturally not to accept a loss. Hence, the mayhem that we are in.

The nature of Kenyan politics has always destroyed the good relations Kenyans enjoy among themselves. Kenya plays divisive politics. It is a country rich in diverse cultures but we don’t celebrate our diversity. Every time leaders take into the podium during electoral campaigns, they remind the electorate where he comes from. They use terms such as muthamaki (royal family), mundo wa nyumba or omonto oito (one of our own); others go to the extent of speaking in their vernacular in order to rally their tribe behind them.

In mature democracies, politicians stand for ideas. Politics is played along party ideologies thus electorates chose to support political wings with the ideologies that they believe in. In Kenya, we’ve a multi-party democracy but do these parties remember to publicize their party manifestos? A closer look at the party manifestos even of the major political parties shows a huge similarity which implies that parties rallied along their manifesto. Here parties claim county A is our stronghold just because a tribal kingpin comes from that county. A tribal kingpin dictates who his electorate will vote for. If he/she says it is political party Q, the majority will vote along that line, up to 98% acceptance has been recorded.

The IEBC is a constitutional body mandated to conduct elections according to Article 88 of the Constitution of Kenya 2010. It is comprised of the chairman and six other commissioners all appointed by the president. It is alleged that commissioners serve their masters’ interest even if they are required to act neutral. Who will perceive a divided commission fair?

Recently, Chebukati admitted in a press conference that he could not guarantee a free and fair repeat presidential election citing frustrations from political players, government and the judiciary. Irrespective of the reasons whether true or false, such statement from the chairman makes people to lose faith on the commission.

After the approval of the commissioners by parliament, by way of vote, they appoint a CEO who doubles as the secretary to the commission. The commission is claimed to have a powerful secretariat. It is not clear who is powerful currently whether the commission or the secretariat. IEBC chair Chebukati ordered Ezra Chiloba to step aside and allow a project team he had appointed to foresee a repeat election but Chiloba still stayed until he later took a leave on his own. That made us to think that probably the commission is not in full control. We understand our seniors at work place as powerful, in case they say take a leave or worse you are fired, you obey. You just can’t decide otherwise except by a court order.

Political interference has also cast doubts on the fairs of electoral commission. Regular protests by one part of the political divide taints the image of the commission. Commissioners going to bed with government results in a partisan body therefore not fair. If the commission doesn’t defend itself in the public and rather enjoys goodwill from one of the players in an election, then the other players and their followers will have a different opinion. It effectively stops being the fair umpire that it should be.

Electoral laws could also be a reason IEBC is not perceived as being fair. The constitution and other electoral laws give guidelines on proper conduct of the entire process. Failure to follow the constitution in every step could render the entire process null and void. The annulment of the August 8th presidential elections greatly affected the way the commission is perceived, it lost its fairness. In another scenario, a returning officer failing by any reason to sign a statutory form will be interpreted as rigging.

In the year 2005, Liberia held its general elections. The National Electoral Commission conducted the elections. There were 22 candidates running for presidency. George Weah came first in the 11th October polls and Ellen Johnson Sirleaf became second in the first round. The two headed for a run-off in which John-Sirleaf claimed a 59% victory against Weah’s 41%.

Rigging allegations came from Weah who said that NEC officials stuffed ballots in favour of his opponent. Allegations which he later withdrew for the sake of peace.

Again, on 10th October 2017 Liberians went to the ballot to elect both the president and members of the House of Representatives. George Weah emerged winner with 38.4% and Joseph Boakai second with 28.8% in the first round. The NEC had set a run-off date on 7th Nov 2017.  Charles Brumskine’s who finished third contested the results in the Supreme Court alleging the process was full of fraud. The Liberian Supreme Court gave direction halting the run-off from taking place until it hears the petition filed by Liberty Party.

Closer home, Uganda, which is Kenya’s immediate neighbour also has its story. The country went to the ballot in February 2006 where the incumbent Museveni ran against other candidates, the major one being the powerful opposition leader Dr Kizza Besigye who vied while in exile. The electoral body declared Museveni winner amidst fraud allegations. Besigye further claimed that the electoral commission rejected votes from his strongholds. The supreme court of Uganda found out that there was intimidation, violence and other election irregularities but ended up upholding the results by a four against three judges during the vote.

In 2016 Uganda again held elections where Museveni faced Dr. Besigye and Amama Mbabazi. Museveni won with 62% of the total votes cast. Besigye contested the results citing voter intimidation, rigging, late delivery of materials for elections, late opening of polling centers, un gazetted tallying centers posting results and bribery among others. This lead to protests and arrest of Besigye and his supporters.

The above is a clear sign that problems facing Kenya are not unique to the country. It’s happening elsewhere in Africa. It’s an African problem.

There can be hope for democracy only if Kenya undertakes reforms to restore people’s faith on IEBC. There should be respect for rule of law, transparency and accountability in the elections process. There should be high integrity in public service.

Finally, on whether Kenya should fix its economics before fixing politics, we have a different opinion. We believe that economics and politics are intermarried as opposed to IEBC chair Chebukati. Here is why economics cannot be separated from politics.

This article was written by Walter Atunga with contribution from Geoffrey Kerosi. Feel free to share your thoughts on the comments section below.

Walter Atunga is a technology and politics researcher and writer for Kerosi.com. He is also an editor on technology for the site. He earned his Bachelor Education Science (Physics and Mathematics) from Kenyatta University, Nairobi Kenya.

More from ElectionsMore posts in Elections »