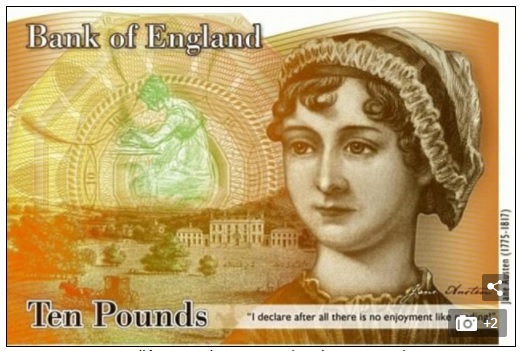 Princess Diana May be Featured on England Currency

Ten pounds note was launched featuring Jane Austen, one of the most famous authors. This is the 2nd polymer note to be launched in Britain. The first one featured Winston Churchill which was launched last year accompanied with a lot of celebrations.

Currently, the queen is featuring on nearly all notes. Church replaced Elizabeth Fry.
There are 36 Sterling pound notes (denominations) in circulation in Northern Ireland, England and Scotland.  Advisa has found out that 76% of these notes feature a male face. There are only 3 women featured on the currency in England: Nan Shepherd, Mary Somerville and Elsie Inglis all appear on Scotland currency.

Out of five people, 3 believe that women have not been given fair representation on British currency.

The survey was conducted on a sample of 5,345 people and it was noted that the majority of the people interviewed want to see Florence Nightingale on their currency. If their dreams come true this will be the second time that she will appear on bank notes. She was feature for the first time on ten pound note between 1974 -1994.

Princess Diana was ranked second on the list of women that the Britons wants to see featured on their currency. Third choice was Emmeline Pankhurst.

JK Rowling was the only living Briton woman who was listed on number nine in that list of preferred women to be featured on currency notes.

The situation is not very different in the rest of the world. The research found out that it is only 10 percent of the global currency notes feature a woman on them.

The world power, United States of America does not feature any woman. Never.

There are 370 notes on circulation in some regions of the world which do not feature people at all. The EURO is a good example.

In Sweden, Japan and Australia there is equality between the number of women and men featured on their bank notes.

In Australia, there are more women than men featured on the bank notes. There are 4 men out of 9 people being men.

Dead male politicians are the only people featured on American bank notes.

The Queen of England has set the record for the high percentage of appearances on bank notes. She actually comprises 50 percent of all female appearances.

Queen Elizabeth II does not appear on notes in England alone. She also appears on bank notes in other countries such as Canada, Australia as well as New Zealand.

Sportsmen are lucky lots. Sir Frank Worrell is the only sportsperson appearing on bank notes globally. He was born in Barbados and became the pioneer captain of a cricket team in the West Indies. He later turned into a politician by becoming a Jamaican Senator. He is featured on $5 bill in Barbados.

Think about your country’s bank notes and let’s know in the comments section whether it features faces of women.