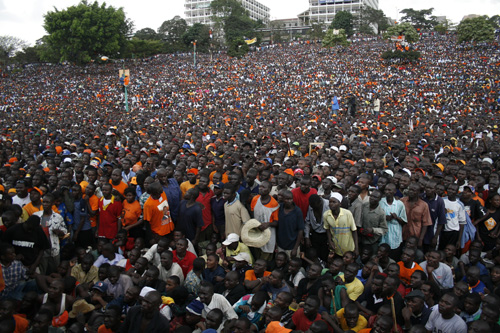 Lately Busia County has been on the limelight because of wrong reasons. The contest between Ojaamong and Otwoma had intensified and ended with some irregularities in the outcomes.

Chaos had been reported earlier after the Otwoma supporters caused fracas due to delay in announcing the nomination results.

A repeat of the nomination exercise will take place on April 25, 2017. This was announced by Hon. Judith Pareno the Orange Democratic National Elections Board chairperson. The results for other positions remain intact. This means that, it is only the governor’s nominations that will be repeated.

Mr. Ojaamong said that Otwuma is a Jubilee mole aiming to disrupt peace in ODM party primaries. He said this will addressing the media after the nomination process in Busia.

The nomination process was also violent in Machakos County. The ODM voters claimed that rigging had occurred there.

A total of 16,000 voters turned up for the nomination process. The town was painted orange by the ODM supporters.

The returning officer for Machakos declared Bob Nyambaka as the ODM nominations winner for Mavoko constituency in Machakos. This happened despite the fact that the votes for Muthwani ward were not tallied.

The outcomes from the ODM primaries in Machakos, Bungoma and Busia has set a bad precedent for the remaining counties. What is happening? This may make ODM to lose its credibility. For NASA to win the presidential elections fairness and credibility should be at the top of their agenda. We encourage the ODM to cancel any nomination results that has been rigged.