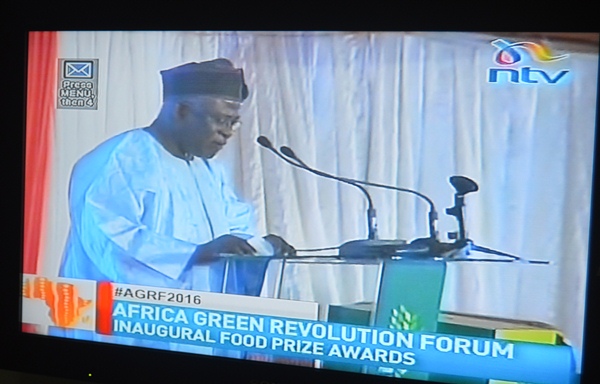 Kanayo Nwanze is the current president of International Fund for Agricultural Development (IFAD). He is a Nigerian national with many years of experience in working at the global arena to promote food security.

This is the very first prize awarded by the African Green Revolution at a Forum in Nairobi City. Nwanze has been a champion in advocating for institutional reforms, policies and innovative programs around the world.

We are proud of Dr. Kanayo Nwanze for putting the African small scale farmers at the top of the agenda at the global arena. He has always worked towards making small scale farming a viable business.

Listening to his acceptance speech, I was impressed by the way Nwanze articulated issues affecting Africans in terms of food security. He was very sad that over 58 million children in Africa suffer from stunting at this point in time.

Dr. Nwanze strongly believes that African problems can only be solved by the Africans themselves. Africa is a great place to be. It is rich with oil, gas, minerals and other resources. This is why we have to be proud as Africans. He was sad that only a few individuals are gaining from the extractive industry in Africa.

“If you choose to rent out your bedroom do you blame your tenant for sleeping on the verandah?” He posed this question to the audience.

In this case he was referring to the people who exploit African resources leaving millions of its inhabitants living in poverty.

Dr. Nwanze pointed out that he has lived a successful life at the fast lane. He shared with the audience that Africans have the capacity to change their lives.

Dr. Nwanze noted that he was happy that Africans are making efforts to excel in Agricultural production across the continent. He narrated one success story where he received a letter from a young bee keeper who started out with a few bee hives and now owns over 400 bee hives. He particularly mentioned that the young man participated in a competition in which he became a winner and was selected to be exporting his honey to the European Union.

Dr. Nwanze pointed out that there many African people making a mark in their life. People live Aliko Dangote, Steve Masiyiwa and Mo Ibrahim. Africa needs a large number of similar people to progress.

Dr. Nwanze noted that youth need to be exposed to opportunities, resources and above all hope. He called for people to do everything to avail opportunities to the young people to succeed in their endeavors.

Published in Agriculture in Kenya