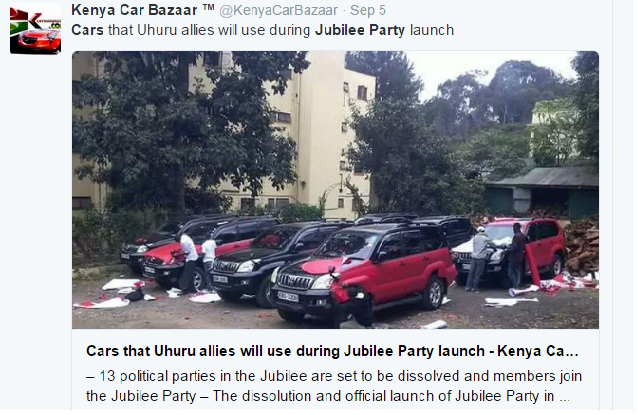 Campaign financing has always been a very expensive affair all over the world. In this blog we will be tracking campaign financing in Kenya for the 2017 General elections. We will give our non-partisan analyzes and opinions.

We have already witnesses mega investments in preparations for the campaigns by the Jubilee Party. numerous Fuel Guzzlers, Tuko Pamoja Plaza (campaigns headquarters for Jubilee). This may be the tip of the iceberg. We are anticipating that the opposition parties will follow suit and reveal their hidden campaign arsenal. It is a show of mighty!

The entire subject of campaign financing in Kenya and elsewhere has always been done under a veil of secrecy. There are numerous sources of finances. This can be both legal and illegal sources. The political candidates, parties and other groups will bank on public funding, personal funds, donations from supporters, contributions in cash or in kind. I have always heard stories of political aspirants who sell personal property to bankroll their political campaigns and then end up in poverty on losing the elections.

Part of these finances originate from ordinary Kenyans,  business tycoons and corporations. We will be on the look out to see how funds flow during the campaign period. It is our hope that illegal sources of financing campaigns will not take a center-stage. Illegal sources include: corruption proceeds, pyramid schemes, drug money and money laundering.

Currently, Jubilee Party is planning for a mega launch. I guess a lot of activities are going on. There is a lot of re-organization being planned. This is in preparation for August 2017 General Elections. Elections is a very expensive affair all over the world. It is expected that several parties will dissolve and join Jubilee Party before the convention. Coalition for Reforms and Democracy (CORD) is also planning for a bigger coalition.

Please share with us stories on how political parties or aspirants raise funds for their campaigns are most welcome. Do not miss the conversation in the comments section.

Published in Business and Campaign-Financing