South Africa: The Land of Protesters in Pictures

It has been long overdue since we visited Johannesburg City on May, 2016 to learn strategies that the civil society organizations use to ensure citizens get access to basic services. In this blog I will share with you my experiences and what lessons I learnt.The photos below summarizes

On our first day we witnessed a street protest. University of Johannesburg students protesting against planned fees hike. It was amazing that over five police vans filled with police officers were deployed to protect the students as they marched a long. People have a right to protest as long as they do not engage in violent protests. 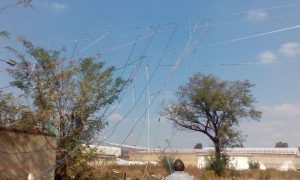 The above two pictures were taken at Joe Slovo Park informal settlements. They prove that illegal electricity connections is not a one country’s domain. This is a common phenomenon in many developing countries. I was surprised to learn that any attempt to remove these illegal connections attracts violent street protests.

Joe Slovo Park is an informal settlement in Jo’burg which was formerly known as Nancefield. It adopted its new name in May 995 in honor of South Africa’s first Minister for Housing as well as a former Umkhonto we Sizwe General, Joe Slovo. It is ironical that still the settlement still does not enjoy their right to housing.

We would not leave Johannesburg before paying a visit to the Constitutional Court of South Africa. This an equivalent of Supreme Court in Kenya. The court is at the apex of the judiciary system in South Africa. It embodies South African history in the way it was designed and the great pieces of art in its vicinity.

The South African currency is rand is the official currency.

The rand was established on 14th February, 1961 as the official currency replacing the British pounds, pence and shillings as a legal tender.

Tells us in the comments what you think about South Africa. We will be glad to have a conversation with you.